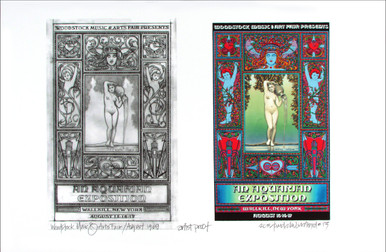 A few years ago, David Edward Byrd, the only artist for all the concerts at the FIllmore East, creator of some of Broadway's most memorable images and conceptual artist instrumental in the development of the Harry Potter graphic franchise, discovered a yellowed folder of concept pencil sketches for some of his most memorable posters, 14 in all. This one was created in September 1969 for Bill Graham's Fillmore East weekly program, the cover of which was used for the entire year. On the left is David's original sketch and on the right is the final version. This is a very nice glicee print, published at a size which is very affordable to frame. It is hand-signed by the artist. Byrd did a cover for the weekly programs every week the Fillmore East was open, 1969, '70 and '71. We also stock program cover posters for 1970 and '71.

On the left is David's original concept sketch and, on the right, the final image.

This Artist Proof was published in 2013. It is an authentic, licensed edition created and personally signed by David. It is a very nice print, very frameable and collectible. It comes with my signed Certificate Of Authenticity and Guarantee (COA).

Also available Framed, shipped in a box that could be wrapped, out the door for $100. If interested, Drop me a line and I will create a custom Buy it Now. Condition: MINT