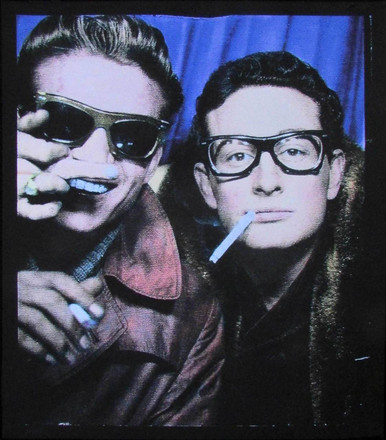 This fantastic photo has been colorized and printed as a full-sized giclee, about 19" x 23".

The shot was likely taken in Grand Central Station in New York, in late 1958 or early 1959 during some Waylon Jennings recording sessions Holly was producing around that time.

Shortly after, Jennings took a train to Chicago to meet up with the band for the ill-fated "Winter Dance Party Tour." Because the buses kept breaking down in the brutal midwestern winter, Holly decided to charter a plane from Fargo ND to Minnesota for himself, Jennings and another band member, Tommy Alsupp. JP Richardson, aka "The Big Bopper," had the flu and asked Jennings if he could have his seat. Richie Valens also talked Alsupp out of his. A few minutes after their 1:50 AM takeoff from Mason City Airport, the played crashed and no one survived.

I also have a few of a companion to this one. It is virtually identical except they are both holding their cigarettes and the friendly flip-off is missing.