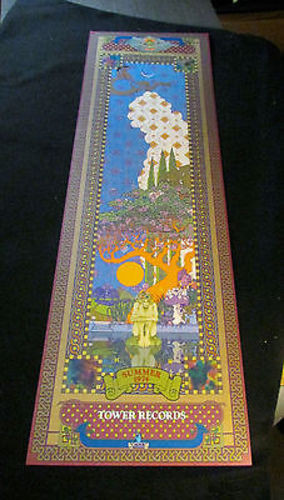 
This original lithograph was published by Tower Records in the summer of 1974. It was part of an early series of art prints celebrating music, stores and seasons.

It is one of a number of very high quality posters and calendars produced by Tower over around four decades starting in 1960. These posters, particularly ones from the late '60s to early '80s, feature ambitious illustrations by Frank Carson, using top-quality paper and printing . It's hard to convey in a picture how good these look in a frame.

Condition: Excellent -- Signs of wear with minor dimples and creases but with brilliant colors and crisp edges and corners.

These very collectible Tower Records calendars and art prints were made throughout Tower's long tenure billed as the "greatest record store in the known world." The number of prints Tower did over the years is not precisely known. They date back to the early '60s and might have been one-offs celebrating a concert, a poster created to be used in-store to publicize a certain release or just commissioned and printed up because somebody liked a band and wanted to promote them. Cat Stevens, the Jefferson Airplane, Aretha Franklin and Bob Dylan were just a few of the artists whose image or work graced early Tower prints.

Later, the prints and calendars publicized store openings or took the form of calendars which touted the local radio stations in Tower store markets all over the country.

Starting in around 1975, the prints morphed into calendars which Tower published for almost three decades, most of which were produced in cooperation with the radio stations, who would pay or trade for the insertion of their logo on a certain number of the calendars. The printing plates were changed to create numerous editions with each station or sponsor's logo, and the result would then be distributed primarily through the Tower stores in that particular market, but also by the stations during promotions.  They were highly sought-after and often turned up in TV sitcoms and movies, such as the music movie FM or the long-running TV sitcom WKRP in Cincinnati.

The Tower print series started in the late '60s and featured high-quality lithography on heavy coated stock.  Artist Frank Carson did virtually all of the art from the mid-'60s into the '90s. They are quite beautiful, evolving from early shots of bountiful hippie chicks employing deco and art nouveau themes to bountiful contemporary chicks surrounded by pop art and symbols of popular culture.  After Carson mysteriously disappeared in the late '80s, a number of different approaches were used to adorn the calendars, from hiring notable fine artists like Jerald Silva to acquiring art by holding competitions between store artists and employees.

These art prints and calendars, especially the early and very late years, are increasingly rare. Tower's aisles teemed with a record biz vibe as customers, store employees and record company salesmen bought, sold and talked music and recordings. It was a highly enjoyable communal ritual that is sorely missed.

Signed by Illustrator: No

Click here to make OptikRock one of your favorite sellers!

Why Us: We pack correctly and ship quickly. We hold and combine orders. We accept all payment methods. We have a 14-day, no questions asked return policy. We love to answer questions. Our mission is your satisfaction.