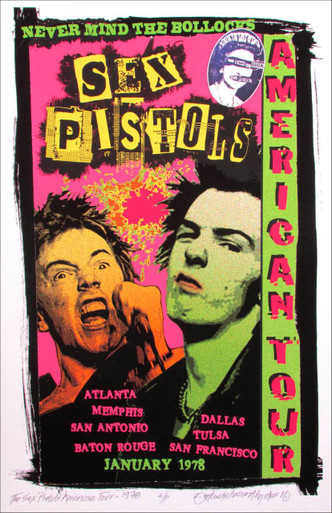 The Sex Pistols' one and only American Tour in 1998, while infamous, was generally regarded as a major shit show. Their manager, Malcolm Maclaren, thought booking them in off-the-punk-grid towns like Tulsa and Baton Rouge would get them lots of press, culminating in a final show at San Francisco's Winterland. But the band started the tour behind the eight ball, with Sid Vicious already strung out, and by the end of the tour, even John "Johnny Rotten" Lydon had had enough.

But despite being roughed up by reviewers, the tour stands as legendary. The Sex Pistols influenced punk and -- particularly -- fashion for decades. This new fan art print created by David Edward Byrd, somewhat legendary himself, is a fantastic portrait of that brief moment in time. This fine-art giclee is printed on ultra-premium matte stock and has been annotated and signed in pencil by the artist.