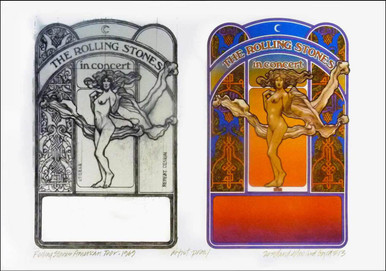 On the left is David's original concept sketch and, on the right, the final image as it appeared in 1969.

Several years ago, David Byrd discovered a folder of rough sketches for some of his most famous posters, buried in the back of a file cabinet. He decided to pair these found sketches with their final published versions as this beautiful print, which offers an interesting insight into the creative process.

About this particular illustration, David says, "I created this poster in September 1969 for Alan Klein, the Stones' manager. It was based on one of Muybridge's "Figures in Motion" against an Islamic motif. The box at the bottom was for the venue overprint. Mick Jagger said "it looks like me in drag." This was the tour that ended in the notorious Hellë's Angels incident at Altamont in 1970. This poster has been pretty much forgotten and was not included in The Art of Rock."