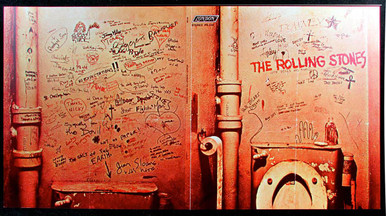 Rolling Stones Beggar's Banquet London Records Rejected Toilet Album Slick MINT You may remember the Beggar's Banquet album cover as white with simple elegant typography and no graphics. The album's original cover art, depicting a toilet and a bathroom wall covered with graffiti, was rejected by the band's record company, and the dispute delayed the album's release for months. This is the cover that was rejected.