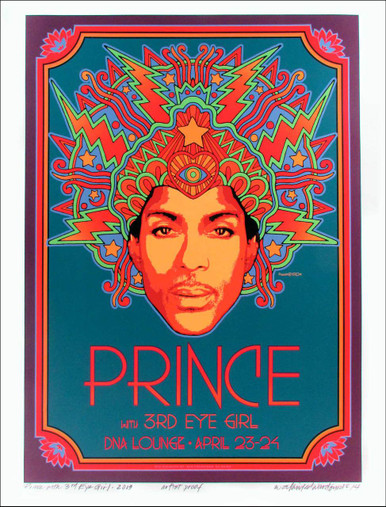 The story behind this really great Prince poster actually starts with Jimi Hendrix at Fillmore East in 1968. At the time, David Byrd was the staff artist at the Fillmore. For this show, Byrd depicted Hendrix with an incredible cosmic afro crown, bolts of oranges and pinks floating in a turquoise sea. It was one of Byrd's favorite posters. Nevertheless, Hendrix wanted the whole band pictured in the poster, so asked him to create another one. David then did the great classic orange Fillmore East poster.

Years later, David found the sketches for the original rejected design and began publishing them. We've been selling them for several years. A few years ago, before his "Live Out Loud" tour, Prince asked David to create this poster in the image of that original Fillmore East design (you can find that design in our eBay store). The result is this fantastic poster in the spirit two of the most original artists in the history of pop music.