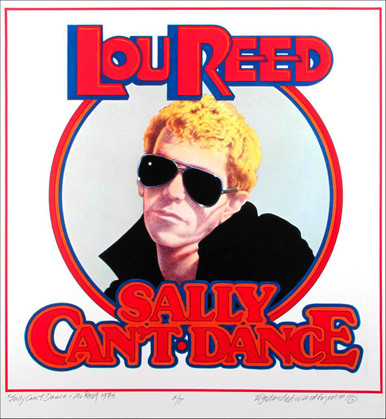 This is an artist's edition of the artwork David Byrd created for Lou Reed's 1975 recording, "Sally Can't Dance." It was Reed's only top 10 record.

David said, "The most that I can remember about doing this album is that I met with Lou Reed at The Ninth Circle, an old gay bar on Christopher Street where Edward Albee drank, as well as my very own self. He brought a shoebox filled with SX-70 Polaroids of various drags and transexuals in all forms of undress, some even tightly swathed in Saran Wrap. One of these was Sally, who can't dance. I put her face reflected in a close-up of his sunglasses on the back of the album. Lou was a handsome man, in a damaged sort of way." (original was Watercolor, Prismacolor Colored Pencils, and acrylic paint on white).

"Sally" was the followup to the legendary live record "Rock 'n" Roll Animal," and RCA wanted a fast followup to exploit Reed's growing popularity. Lou reportedly hated the pressure so much he gave the label "Metal Machine Music" which was comprised completely of dissonant feedback and mechanical noise. Turns out his contract said they had to release whatever he gave them. I worked at Tower Records for many years, and we used to put MMM on to clear the store at midnight.

While the record was a hit and elevated Reed's status as a star, he reportedly was disappointed in its production (in which he took a largely passive role) and the treatment of the songs. Reed remarked, "It seems like the less I'm involved with a record, the bigger a hit it becomes. If I weren't on the record at all next time around, it might go to Number One."

This reproduction is new, impeccably printed on ultra-premium matte stock and signed in pencil by David.

David Byrd has secured a place in rock poster history. But along the way he has made dozens of highly memorable, iconic poster images for not only the Fillmore East (where he was the only poster artist), but for Broadway shows such as Follies, Tommy, Jesus Christ Superstar, Godspell, Little Shop of Horrors and many, many more.