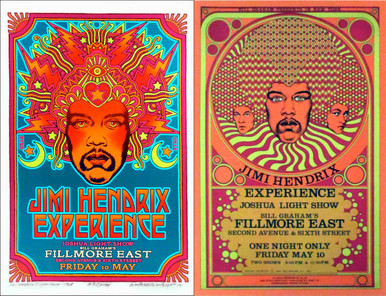 In 1968, Byrd was hired to create a poster for The Jimi Hendrix Experience at the Fillmore East. The turquoise-colored Hendrix poster pictured here was the original that Byrd submitted. Hendrix rejected the design because he wanted all three band members to be pictured. David went back to the drawing board and created the famous orange Hendrix Fillmore East poster. The exploding headdress version was shelved.

Some years ago, David was rummaging around in an old file cabinet and found a yellowed folder filled with pencil sketches of 13 of his legendary poster designs, one of which was the Hendrix with the cosmic helmet. He re-created the image employing the same techniques he used in the ‘60s, a back-painted film positive.

He said, “I made a subsequent decision to create the art as I originally created its successor — as a backpainted film positive, the same process used before the digital era to create animation cells. For me, this somehow captures the Experience of seeing and hearing him live that night, the only time I got to see him perform.”

Also interesting: Fast forward to 2013. Prince was playing the Oakland Coliseum and had arranged for an after-hours show at the DNA Lounge. He had somehow run across the original Hendrix design and posed a question: Could David create a poster for Prince’s after-hours performance at the DNA Lounge? That poster is also available elsewhere on here.