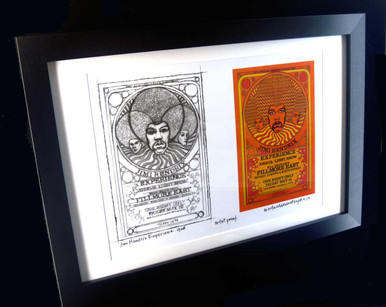 David Edward Byrd's Jimi Hendrix at the Fillmore East, May 10, 1968. This signed giclee is an artist's proof published by David. This beautiful giclee print is a reproduction of David's famous original, which was created after Hendrix rejected an earlier design because the entire band wasn't pictured. He used an ancient drop-bow compass to draw the hundreds of tiny circles in the comingled hair of the band, all by hand. This beautiful, newly-printed Artist's Edition has been hand-signed in pencil by Byrd.