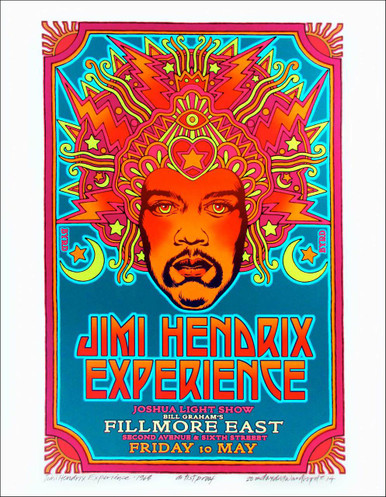 This full-sized 17" x 22" giclee print is David Edward Byrd's Early Alternate Poster for Jimi Hendrix's appearance at the Fillmore East in 1968. This preceded the now-famous orange final version Experience poster which included all the members of the band at Hendrix's request. It is Byrd's favorite of the two and, as he describes below, for him it more closely captured the experience of seeing Hendrix live. This is a full-sized 16" x 22"artist proof signed in pencil by David. It comes with a Certificate of Authenticity (COA) and guarantee. Even though this first poster was not published, it has a great history and is Byrd's preference of the two. "At the very back of a yellowed folder containing old pencil sketches," he said, "I found this Hendrix idea and realized what a strange journey it has had. Jimi wanted all 3 band members to be in the poster, so I ditched this and used the now-famous orange one. But in 1970 I was asked to do a poster for a musical about the Rock recording recording industry called Soon, starring then unknowns Richard Gere, Barry Bostwick, Peter Allen & Nell Carter! It ran for 3 days. After I decided to create a finished painting from the original pencil, I made a subsequent decision to create the art as I originally created its successor — as a backpainted film positive, the same process used before the digital era to create animation cells. I also decided against the black background (which I DID use on the Soon poster) in favor of a deep blue-green. For me, this somehow captures the Experience of seeing and hearing him live that night, the only time I got to see him perform. In new, mint condition The well-known orange version in a full-sized artist's edition, also signed by David, can be found here: Prince asked David to create a similar poster for his appearance at the DNA Lounge in SF in 2013. You can find that one here: