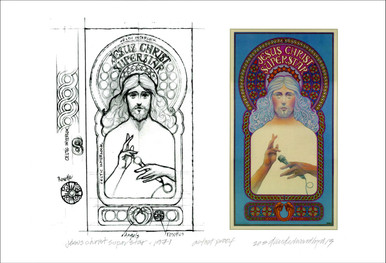 Stephen Sondheim's "Follies" Poster + Found Concept Sketch New Artist Proof Signed by Artist David Byrd. Includes Certificate of Authenticity and Lifetime Guarantee (COA). Originally created for the original show which ran on Broadway in 1971. Äat the very back of an old yellowed folder containing old pencil sketches I found theseÄ so began David Edward Byrdês tale of finding the original concept sketches for 14 of his most exciting and famous illustrations in the back of a dusty file cabinet. Ultimately, he combined them with the final images to create these fascinating two-ups, as he calls them. The left side is a reproduction of the original sketch and on the right side the final version. They are flawlessly printed on beautiful paper and David annotates and signs them in pencil. About this piece, David says, "I was commissioned to do a poster for the largest exhibition of Art Deco period artifacts since the famous Exposition des Artes Decoratif in Paris in 1925, nearly seventy years earlier. It was held in the Upper and Lower Lobbies of the Radio City Music Hall, itself a Deco masterpiece, and over the years has achieved legendary status as a landmark exhibit. And it is certainly the last time we shall see such objects of desire and beauty brought together again. This is a personal favorite." This Artist Proof was published in 2013. It is an authentic, licensed edition created and personally signed by David. It is a very nice print, very frameable and collectible. It comes with my signed Certificate Of Authenticity and Guarantee (COA). This newly-published artistês proof is an authentic edition created and personally signed by David. It is a very nice print, sized right for easy and economical framing and very\ collectible. It comes with my signed Certificate Of Authenticity and Guarantee (COA). About the art for Sondheim's "Follies," David says, "Roger Puckett at Triton Gallery told me in Fall 1970 that Hal Prince was producing a new Stephen Sondheim musical called Follies.ê Blaine-Thompson, the agency handling the ads, said they had already hired 10 artists, but I could present with no fee. This poster is actually a complete revision from the first sketch that I presented. Hal Prince chose that first sketch as the way to go, but an aesthetic argument intervened, and the result was this art, which is based on a photo of Marlene Dietrich in Shanghai Express and the crack, a metaphor for an era's end. The show opened at The Wintergarden on my 30th birthday, 4 April, 1971." Also available framed, shipped in a box that could be wrapped, out the door for $120. If interested, Drop me a line and I will send you an invoice.