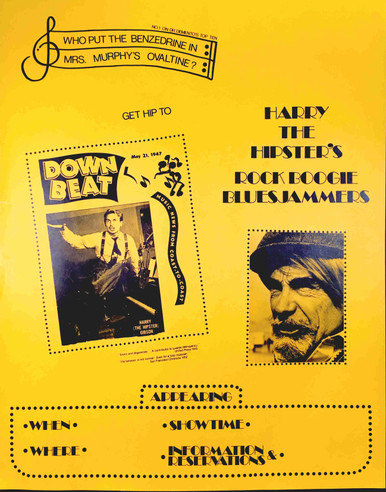 Another great old Harry the Hipster poster, created by him and used while on tour in the ‘70s and '80s.

I bought a few of these from a close friend some years ago who acquired them directly from one of Harry’s kids.

This is the first time I have listed these. I also have a "Wanted 'The Hipster'" Harry poster, which is dark orange on a very thick card stock. For those Harry fans who have the other one, I just want to point out this one is on normal, medium weight matte paper. This is also much lighter in color, but still deep canary color which I found hard to capture in the pictures.

It has a banner at the top which reads "WHO PUT THE BENZEDRINE IN MRS. MURPHY'S OVALTINE?"

The headline is: "HARRY THE HIPSTER'S ROCK BOOGIE BLUESJAMMERS" right above a photo of Harry presumably from the '70s.

On the left center, there is a small reproduction of a Downbeat cover with quotes below it which say:

"His behavior is not normal - even for a bop musician."
-San Francisco Chronicle 1952

At the bottom is an "APPEARING" area, with open spaces labeled WHEN, WHERE, SHOWTIME and INFORMATION & RESERVATIONS

Harry Gibson was a boogie woogie/stride/blues piano player for 60 or so years, starting in the ’30s. He was famous for his wild style, and his sly references to and consumption of mood-altering substances. His one hit, “Who Put the Benzedrine in Mrs. Murphy’s Ovaltine,” also got him blackballed in the record business.

In fact, Harry was classically trained, a once-fellow at Julliard, and pioneered a frantic stride boogie playing and inventive songwriting foreshadowing rock n roll by ten years. After the blacklisting in the mid-'40s, he faded from view.

When Dr. Demento rediscovered “Who Put the Benzedrine” in the '70s, the notoriety helped revive his career and he toured and released records until the late '80s. He died in 1991.