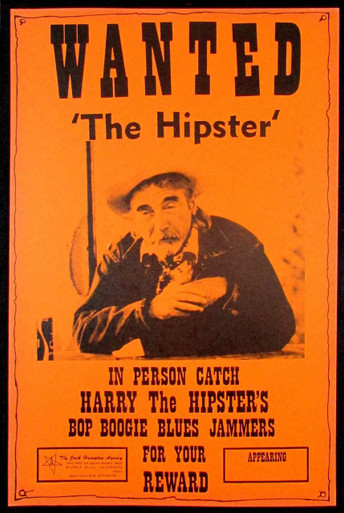 This is a great old Harry the Hipster poster, created by him and used while on tour in the ‘70s and beyond. My source for this poster acquired it directly from one of Harry’s kids.

Harry “The Hipster” Gibson played boogie woogie and stride piano for about 60 or so years, starting in the ’30s and ending with his self-inflicted death in 1991.

He was famous for his wild style, his preoccupation with mood-altering substances of all kinds and his one hit, “Who Put the Benzedrine in Mrs. Murphy’s Ovaltine.” But in fact, Harry was an exceptional musician who was a fellow at Julliard, and whose frantic stride boogie playing and inventive songwriting foreshadowed rock n roll by ten years.

This cool old poster is on very heavy cardboard and will ship flat via Priority Mail.