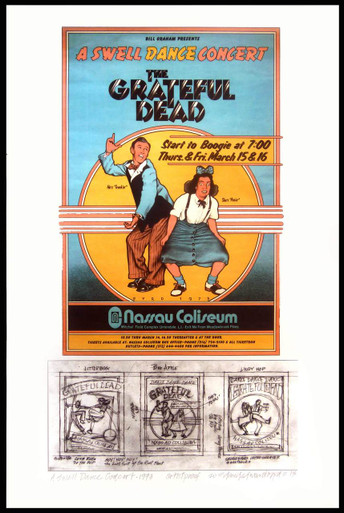 Awhile back, illustrator David Byrd found a folder at the back of an art cabinet which contained a bunch of final concept sketches for posters he did for Bill Graham's Fillmore East, an assortment of Broadway shows, and others. He decided to create a set of new prints featuring both the sketches and the final art on the same print.

On the left is David's original concept sketch and, on the right, the final image.

About this particular Grateful Dead concert, David says, "This poster was created for Bill Graham after the Fillmore East had closed. As The Dead was a famous boogie band, Bill wanted to do a dance concert with them on the East Coast, something he did every night in San Francisco, but could never do at the Fillmore East as it was a traditional sit-down auditorium. So, he removed all the seats from the huge Nassau Coliseum on Long Island so New Yorkers would be free to Boogie! To his shock and dismay he discovered that NY audiences want to sit and listen, maybe stand in their seats, but never dance. _Hey, where'd all the seats go?î It was a swell time anyway!"