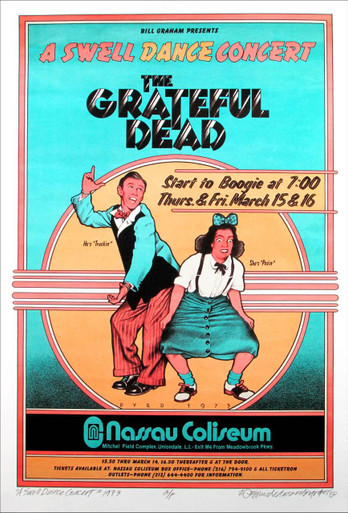 "This poster was created for Bill Graham after the Fillmore East had closed. As The Dead was a famous boogie band, Bill wanted to do a dance concert with them on the East Coast, something he did every night in San Francisco, but could never do at the Fillmore East as it was a traditional sit-down auditorium. So, he removed all the seats from the huge Nassau Coliseum on Long Island so New Yorkers would be free to Boogie! To his shock and dismay he discovered that NY audiences want to sit and listen, maybe stand in their seats, but never dance. Hey, where'd all the seats go? It was a swell time anyway!" - David Byrd

David Byrd certainly has a secure place in rock poster history. Along the way, he has made dozens of highly memorable, iconic poster images for not only the Fillmore East (where he was the only staff poster artist), but for Broadway shows such as Follies, Tommy, Jesus Christ Superstar, Godspell, Little Shop of Horrors and many, many more. In addition to numerous book and album covers, he was also a key designer for the Harry Potter franchise.