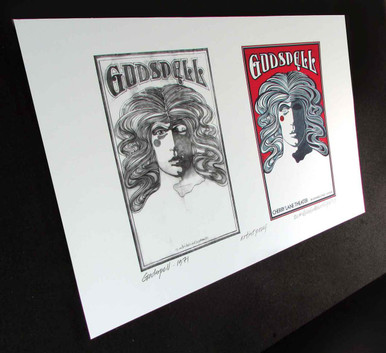 The musical composed by Stephen Schwartz opened off-Broadway on May 17, 1971.
First performance was in 1970

David Byrd was the artist who created the original Godspell poster. This signed artist's proof of the final art is accompanied by the original concept sketch which Byrd found some years ago in the back of a file cabinet with other old preliminary sketches.

About "Godspell," David says, "I was in producer Edgar Lansbury's office to discuss a new show he would be opening Off-Broadway when he took me to his window, and said, 'I'm doing a musical based on the life of Jesus, and I want the poster to look just like that,' pointing down Broadway. If you leaned out his window you would see a giant version of my Sondheim's Follies poster on the marquee of the Wintergarden Theatre. I agreed to the job, figuring a successful musical about Jesus fit the snowball in hell category. Well, it ran 8 years and even became a movie. At first I jokingly called it "Son of Follies," but now it is even more recognized than its up-town predecessor."

David makes these in small batches. It is an authentic, licensed edition created and personally signed by David. It is a very nice print, affordable to frame and collectible. It comes with my signed Certificate Of Authenticity and Guarantee (COA). Other prints in this series are also available in my store.

Also available framed, shipped in a box that could be wrapped, out the door including shipping in the continental US for $120. If interested, Drop me a line and I will put one together for you.