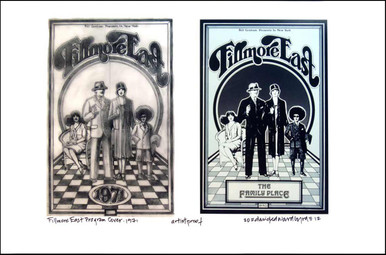 David Edward Byrd's Little Shop of Horrors Poster was originally created in 1982. This signed giclee artist proof features his original sketch on the left with the final poster art on the right. "...at the very back of an old yellowed folder containing old pencil sketches I found these..."

Byrd, who was the only artist for all the concerts at the FIllmore East, discovered a yellowed folder of concept pencil sketches for some of his most memorable posters, 14 in all. About creating this marvellous illustration for "Little Shop of Horrors," David says, "By the time Albert Poland called me to work on this new show I had already been in Los Angeles for a couple of years. We had worked together previously on a Sam Shepard play in the 60s. Everything about this gem of a show which opened at the Off-Broadway Orpheum was wonderful, especially the script, the lead performers, the songs by Howard Ashman and Alan Menken, the sets, the lighting, everything! It was just what an Off-Broadway musical show should be. My poster seems to fit the whole affair as I remember it." This Artist Proof was published in 2013. It is an authentic, licensed edition created and personally signed by David. It is a beautiful print, very frameable and collectible. It comes with a signed Certificate Of Authenticity and Guarantee (COA). ♫ Also available Framed, shipped in a box that could be wrapped, out the door for $100. If interested, Drop me a line and I will create a custom Buy it Now.