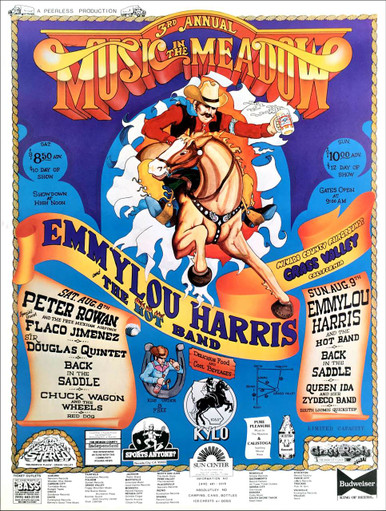 Created by Peerless Productions for the 1981 "Music in the Meadow" festival at the Nevada County Fairgrounds in Grass Valley, California, fabulous and rip-roarin' posters like this really aren't made any more. It's printed on paper a little thicker than many posters of this era. The logos give witness to an era when local business were much more involved with concert promoters, who were also local. One of the promoters, Jeff Hughson, told me "we were so happy to get Budweiser as a sponsor we had our nose up their asses for weeks. We even put a mug of beer with a Bud logo in the cowboy's hand."

One of my customers bought this poster awhile back and brought it backstage for Emmylou to sign. She had totally forgotten about it and asked for one. Of course, I obliged!

And yes, while it's a great poster image, it's also an awesome bill. Just take a look at this lineup: Emmylou Harris and the Hot Band; Peter Rowan and the Free Mexican Air Force with Special Guest Flaco Jimenez; The Sir Douglas Quintet; Back in the Saddle; Queen Ida and Her Zydeco Band; Chuck Wagon and the Wheels; Red Dog and local Sacramento area favorites South Loomis Quickstep Band

We are guessing that the illustrator was M. Moore. While my pal Jeff produced this show, he could not remember the illustrator's name. A British customer recently told me the prior year's poster was done by Moore, which jogged Jeff's memory and he thinks this one was done by Moore as well. We don't know absolutely for sure, but we do know the illustrator was from Nevada City and also did large-scale outdoor painting, possibly for an agency. If anyone can confirm who did the art for this, we'd love to know.