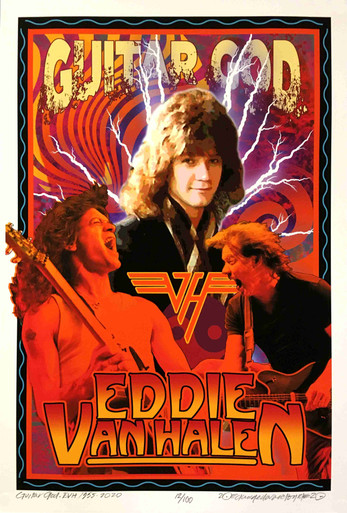 Byrd created this poster to honor Eddie Van Halen following his death in 2020. He had a close relationship with Van Halen having designed various tour sets and art for Van Halen manager Noel Monk's book "Running With the Devil."

The poster is a beautifully rendered giclee print on high quality Epson matte paper. It includes a signed Certificate of Authenticity and Lifetime Guarantee. COA.

David Byrd has been creating iconic images for rock's most legendary artists and tours for over five decades. And that's not even mentioning some of Broadway's most memorable show poster designs. He has also created fantastic set designs and style guides for some of the most successful movies in history. Rarely has any commercial illustrator amassed such an impressive body of work.

In addition to his famous Woodstock, Jimi Hendrix and Rolling Stones Tour artwork, Byrd has been a wonderful and prolific illustrator of all types of art. Over parts of six decades, David Byrd was especially active in the Broadway show arena, having done the art for Little Shop of Horrors, Jesus Christ Superstar and many other Broadway show pieces.

• In early 1968, at the recommendation of art school chums who were running things for Bill Graham at the new Fillmore East in Manhattan's East Village, David Byrd signed on as the exclusive poster & program designer, and between 1968 & 1973 he created posters for Jimi Hendrix, Jefferson Airplane, the Who (for their rock opera Tommy); Traffic, Iron Butterfly, Ravi Shankar and the Grateful Dead. In 1969 David created the original commemorative poster for the legendary Woodstock Festival until it was replaced by Arnold Skolnick's famous design because the location changed!

• That same year David Byrd created the graphic for the Rolling Stones 1969 Tour that tragically ended at Altamont. It was also in1969 that David began his career as a Broadway poster designer. Over the next 20 years David would do many Broadway & Off-Broadway shows including Sondheim's Follies, Godspell, Jesus Christ Superstar, Little Shop of Horrors, Steel Magnolias and The Cocktail Hour. He also did the poster for Beverly Sill's farewell performance (in Don Pasquale) at the Metropolitan Opera. Beyond the stage, Byrd & his Yellow Studio created book covers for most of the major publishers, album covers for most of the major music companies, and many advertising illustrations for Madison Avenue • In 1973 he received a Grammy Award for album design along with several other prominent illustrators for The Who's Rock Opera Tommy.

• In 1980 he came to Los Angeles to work on the Van Halen World Tour with tour designer Chip Monck and Van Halen manager Noel Monk, both of whom he had worked with at the Fillmore East and Woodstock Festival. He decided to stay in Los Angeles where he subsequently did posters for dozens of local venues. From 1984 to 1986 he was Art Director of the national gay news magazine The Advocate. Beginning in 1978, David did regular covers for TV Guide, creating portraits for Cagney and Lacey, Murder She Wrote, Battle Star Galactica, Family Ties, Robert Conrad, the 1988 Winter Olympics, the Fall Preview, and Prince Charles & Princess Diana. In 1985 David created Byrd/Beserra Studios with his partner and fellow-artist Joe Lino Beserra, whom he met shortly after working on the Van Halen Tour. Together they designed a classic poster of the Pan Pacific Auditorium for the American Cinematheque; all the art for the board game Past Lives; art for the Franklin Mint Special Edition of the board game Clue; as well as backgrounds for an animated Sprint commercial

• In 1991, he took the position of Senior Illustrator at Warner Bros. Creative Services, which he held for exactly 11 years • Besides creating illustrations, backgrounds and style guides for all the Looney Tunes & Hannah-Barbera characters, David got to create commemorative plates for the Franklin Mint, souvenir posters for the Batman series of films, and style guides for feature films such as Space Jam and The Wizard of Oz, television shows such as Friends and Scooby Doo, and the Cartoon Network

• His department was responsible for the Bugs Bunny postage stamp-the first cartoon character on a U.S. stamp-and all the subsequent Looney Tunes stamps

• During his final three years at Warners, David worked on the Masterpiece style guide, creating a series of paintings based on originals by Degas, Picasso, Magritte, and Toulouse-Lautrec, among others. But most of that three years was spent working on the Harry Potter style guides, for which David did hundreds of drawings of everything from Diagon Alley to the Hippogriff.