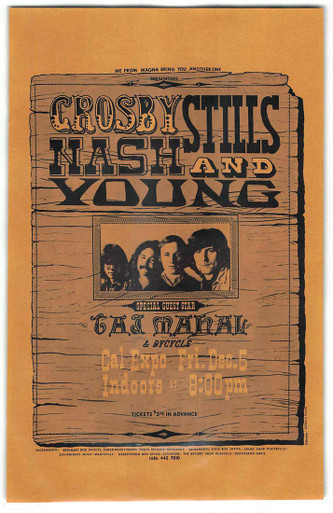 Sacramento artist Bob Treloar created this unusual and very rare handbill for John Mayall's appearance at Cal Expo in 1968. There is also a full-color poster using the same basic image. Norman Greenbaum was riding high on his single "Spirit in the Sky" which peaked just one week later at #3 on the Billboard charts. Maybe that's why the winged angel is consoling Mayall. Although he has made a good living touring, mentoring young musicians and releasing over 100 recordings starting in the mid '60s, he never had a hit. This handbill is on light paper stock. Condition: EX -- soft wrinkles and dimples as pictured. Small stain on reverse.