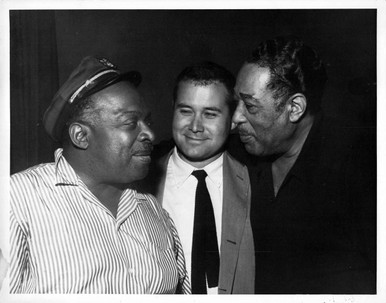 Basie and Ellington are, of course, at the top of the heap of legendary jazz performers and need no introduction.

Producer/label owner Theile is less well-known, but quite accomplished. His most enduring contribution to music was co-penning the classic tune made famous by Louis Armstrong, "What a Wonderful World." He was also a legendary producer, having produced John Coltrane, Louis Armstrong, Basie and Ellington among others, including Buddy Holly. Theile was also married to singer Theresa Brewer. Thiele's Wikipedia bio is below.

This original photograph was sent to writers and the general press for publicity purposes. It was never available to the general public. It is an actual original continuous-tone photographic print, not a digital copy. This photo is unconditionally guaranteed to be an original, official, authorized continuous-tone photograph, authentic in every way. These non-digital photographs are no longer made and will grow in value as they become increasingly rare.Ê Photos are typically M or NM but may occasionally have staple holes in one corner.

Bob Thiele was born in Sheepshead Bay, Brooklyn, New York on July 27, 1922.[4] He hosted a jazz radio show when he was 14. He also played clarinet and led a band in the New York area. At 17 he founded the Signature Records label and recorded many jazz greats, including Lester Young, Erroll Garner and, in 1943, Coleman Hawkins. Signature folded in 1948 and he joined Decca Records in 1952, running its Coral Records subsidiary. His wife was the singer Teresa Brewer, whom he met and produced while working for Decca Records in the 1950s.

He took over as head of Impulse! Records from 1961-69 after founder Creed Taylor left to run Verve Records. Thiele's best known association while at Impulse! was with John Coltrane, but he also recorded such artists as Charles Mingus, Dizzy Gillespie, Sonny Rollins, Archie Shepp, and Albert Ayler among others. His most successful hit song was with Louis Armstrong's "What a Wonderful World", which he co-wrote with George David Weiss. According to Thiele's memoir, the recording session for this now-famous song was the scene of a major clash with ABC Records president Larry Newton, who had to be locked out of the studio after getting into a heated argument with Thiele over the song.[5] "What a Wonderful World" was credited to George Douglas or Stanley Clayton. These are pseudonyms Thiele used, made from the names of his uncles, Stanley, Clayton, George, and Douglas.

In the late 1960s Thiele was often brought in to produce artists on the company's Bluesway Records label. He produced the albums that graduated B.B. King toward the mainstream, including Lucille (1967).[6] He also produced BluesWay recordings by John Lee Hooker, T-Bone Walker, and others.

After seven years with ABC Records, the parent of Impulse!, Thiele formed his own company, Flying Dutchman Productions, in 1968.[7] Thiele later formed his own record label, Flying Dutchman Records, which is now part of Sony Music Entertainment. Later in his career Thiele formed Red Baron Records, which released a number of albums on compact disc, including three by the Bob Thiele Collective, each a different "all-star" group which Thiele himself assembled and produced. In 1995 he released a memoir titled What a Wonderful World.

Thiele remained active in the music business until the end,[4] including the co-writing of the song "You," which was recorded by Bonnie Raitt and appeared on her 1994 album Longing in Their Hearts.