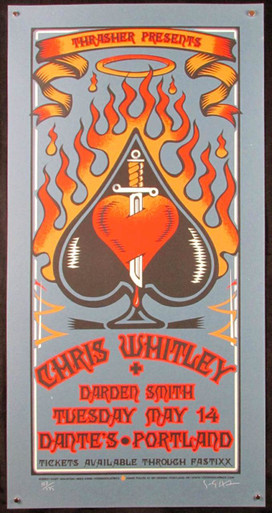 Whitley was born in Houston, Texas and learned to play guitar when he was fifteen. His father was an art director and his mother was a sculptor. During his youth he lived in Dallas, Texas, Oklahoma, Connecticut, Mexico and Vermont. His parents "grew up on race radio in the South" and their musical tastes—including Muddy Waters, Howlin' Wolf, Bob Dylan and Jimi Hendrix—influenced Whitley.

During the early 1980s Whitley was busking on the streets of New York City and collaborating with musicians Marc Miller, Arto Lindsay and Michael Beinhorn. He was given a plane ticket to Ghent, Belgium in 1981, and lived there for six years, recording several albums and playing with the bands Kuruki, 2 Belgen, Nacht Und Nebel, Alan Fawn, and A Noh Rodeo.

In 1988, producer Daniel Lanois heard Whitley perform at the Mondo Cane club in New York City and he helped Whitley obtain a recording contract with Columbia Records. In 1991 two of Whitley's songs charted on the Billboard Mainstream Rock charts: "Big Sky Country" (#36) and "Living with the Law" (#28)

Whitley's style drew on an array of influences. In 2001, the New York Times described him as "restless, moving into noise-rock and minimalist jazz evoking Chet Baker and Sonic Youth as much as Robert Johnson". He recorded songs by Robert Johnson and Bob Dylan as well as Lou Reed, James Brown, J.J. Cale, The Clash, Nat King Cole, The Doors, Willie Dixon, The Flaming Lips, Jimi Hendrix, Howlin' Wolf, The Jesus and Mary Chain, Kraftwerk, Gary Numan, The Passions, Prince, The Stooges, and Sonny Boy Williamson II.

In fall 2005, Whitley canceled his tour due to health issues. He died on November 20, 2005 in Houston, Texas at the age of 45. After his death, John Mayer said, "his somewhat prostrated place in pop culture earned him a sidebar of an obituary, but to those who knew his work, it registers as one of the most under appreciated losses in all of music." Whitley is survived by his brother Dan and his musician daughter, Trixie Whitley.[19]