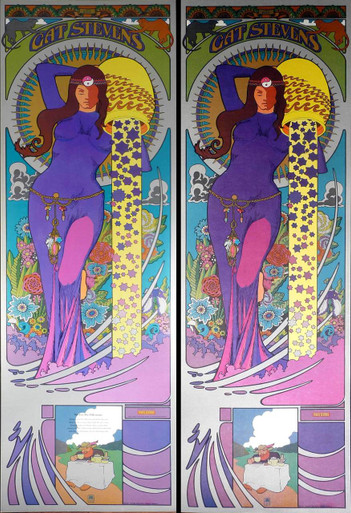 These two rare original printings were published by Tower Records to promote Cat Stevens' "Tea for the Tillerman" album in 1971. This is a set of the original prints. One was distributed to customers of the then-small tower Records chain. The other is a rare test print of which only a handful exist.

This is the first time the two have been offered as a set and there are a very limited number available. They are lovely, fantastically interesting conversation pieces that will appreciate vigorously in the coming years.

You will not find this set anywhere else!

Version "A" is on heavy glossy paper and contains the lyrics. Version "B" is is on a heavy pebbled matte stock and does not have the lyrics.
These early Tower Records calendars and art prints are really nice. Carson's art is gorgeous and interesting, and they are beautifully printed on glossy heavy paper stock. Tower's continued notoriety, the art's high quality, impressive size and intrinsic beauty guarantee they will appreciate nicely in the years to come. They look fantastic framed.

Tower created these highly collectible posters for most of its long tenure as the "greatest record store in the known world." The exact number of early-year press runs is unknown, but in years when Tower had just a few stores were likely not high.

In the '60s and early '70s, some of the posters were one-offs celebrating a concert or created for use in-store for a specific release. Cat Stevens, the Jefferson Airplane and Bob Dylan were just a few of the artists whose images or albums graced early Tower prints.

Starting in around 1975, as Tower grew along with the press runs, the prints evolved into calendars. Eventually, most were produced in cooperation with radio stations, who would pay or trade for printing plate changes which enabled the insertion of their station logo on a certain number of the calendars that would be distributed by their local Towers and through station promotions. They were highly sought-after and turned up in TV shows and movies, such as the music movie "FM" or the long-running TV sitcom "WKRP in Cincinnati."

Artist Frank Carson did virtually all of the art from the mid-'60s into the late '80s. They are quite beautiful, with bountiful hippie chicks nestled into rich deco and art nouveau themes to bountiful contemporary model types surrounded by pop art and symbols of popular culture. Carson disappeared from the Sacramento art scene in the late '80s and a number of different approaches were used to adorn the calendars, from hiring notable fine artists like Jerald Silva to acquiring art by holding competitions between Tower store artists and employees.

These art prints and calendars are increasingly rare. They are mementos of the days when Tower's aisles teemed with a record biz vibe as customers, employees and record company salesmen bought, sold and talked music and records. It was a highly enjoyable communal ritual.