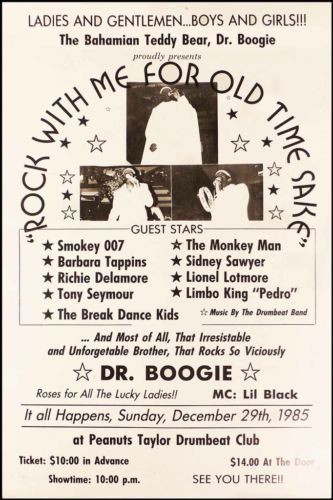 This poster is the greatest -- funny, cool, real. It turns out Peanuts Taylor is a legendary drummer who is synonymous with Bahamanian music.

Berkley "Peanuts" Taylor's dynamic and hypnotic beat has been entertaining listeners in Nassau and around the world for more than six decades.

The oft-repeated legend is that as a four-year-old he passed the over-the-hill nightclub of internationally acclaimed dancer Paul Meeres.

"I can sing and dance better than you," bragged the youngster.

"You're nothing but a peanut," said Meeres, but after the boy went into his act on the spot, Meeres hired him to share a stage with 300 pounds of joy, "Princess" Augusta Lewis. The bill read, "Big Bina and Peanut the Wonder Boy." By age 18 he was touring Asia and Europe with a 25-member entourage.

Taylor had a series of nightclubs in the Bahamas for over 30 years. He has performed around the world - including Havana's Tropicana in the buoyant 1950s - as a musical ambassador for The Bahamas.

In 1993 his efforts earned him an MBE - membership in the Most Excellent Order of the British Empire.

He took 22 musicians to Cuba in 2000 to demonstrate Bahamian Junkanoo music and culture. He performed at Percussion 2001 in Cuba. He was the first non-Cuban to receive Cuba's cultural medal of honour and was made a professor of percussion at Havana's Superior Institute of Art.

However, no one seems to know much about Dr. Boogie, except that he is an irresistable, unforgettable brother who rocks so viciously.

If you have questions about my stuff or yours, please write me, Mike Farrace. I am always happy to answer questions.

➜ Accept all forms of payment.